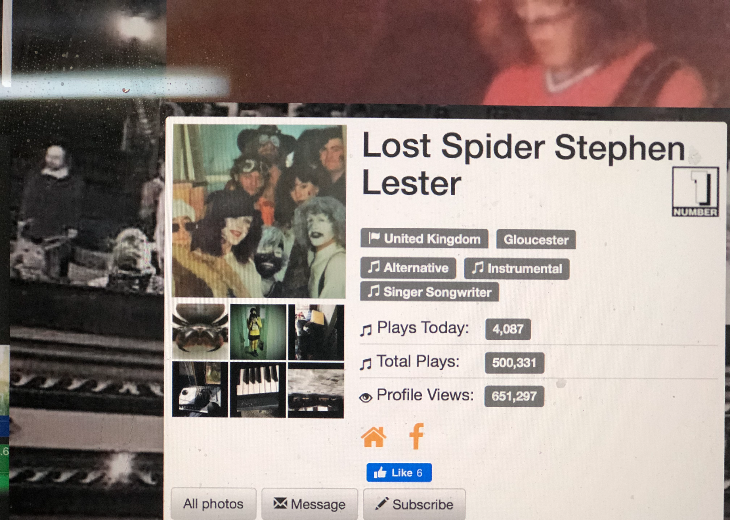 Stephan Lester, code name: Lost Spider, is a singer songwriter from the U.K., who presides over a charity which supports the Farmers Market in his town. Engineer by day. Husband and father of two by night. When the clan is off to bed, he sneaks off into is studio, which doubles as a lab. Poet since a child, music, science and math fueled his imagination. "It's not easy working three jobs. One to support the family. One to support my creative hobbies, and one to support my community." He wrote: "It's getting a bit deep. I mean the things people say, believe, and do." Pausing to address late comers to the show, he added, "Deep in a sense of desperation. It's like an ear worm has got a hold of certain people and wow, what happened to humanity?

I asked Stephen about his projects with Android and he smiled and mentioned that he is starting to believe he really has a Starship. Since this was a podcast with limit video angle for facial recognition, I couldn't see if he winked or something like that. He mentioned that they only met a few months ago, and one day they agreed to work on a project together. Here's what the Lost Spider had to say about that.

"I went to bed Thursday night after discussing a collaboration with Android. I was amused at the subject matter from "Tossing Cookies, Black Op", and when he asked if I wanted to be in the follow up, I thought to myself, hmmm? He said, "I wrote the song right after Black Op, so you do the background vocals on this one." <<hold for citation>>. Today, I received an email with a few keywords, but had no idea of what Android's lyric and voice overs would be. Just the music and the script in little bitty fragments. I thought, this is going to be fun. I sent my part back just before his dinner hour. Last we spoke he had to check up on his mommy and then would do his voice overs. The time difference put a little weight on the old eyelids, so off to bed I went. I woke up around 2:30 AM to check on the kids and close a light that was bothering me, and noticed an alert on my cell. I had the file back as if it were some sort of hot potato."

Release date: April 15, 2020 for the official video. The track is available now to System 14 Affiliates, and to the public by request.

"Pack King Heat MI6" After neutralizing the lab that created the virus, Android and his team are quarantined for three weeks onboard a System 14 controlled nuclear submarine. The team trains. Fasts. Meditates. Seal Team Zeta is isolated in another part of the sub. Hermes begins tracking Asmodeus with the help of an MI6 Scientist, code name: Lost Spider, while Azza and Android focus on other aspects of the mission, including command of the Dragon-1 SRV in orbit lined on the dark side of the Moon. Coms are open from Moon Base ETAH-I. Signal strength at maximum with a direct link to Saturn, Mars, and Vesta 4. Jupiter remains under control of the Dark Council. As Android and Azza calculate the coordinates for the time hop, Hermes makes comments in the background about how smart this Lost Spider Doctor is. The mission date approaches with steady progress. Iggy Ice & Rosie Rumba are in an L6 flying cover on the morning the Chairman of the Board lead the teleconference. She gave special clearance for the Lost Spider to participate in his first intergalactic meeting online. His assistant received a package contain a table on System 14 frequency. The note said: "Do not drop." He looked up and saw a hologram, and dropped the tablet. Luckily his assistant Serena caught it and all was well. (more to come).

Title: Let Me Take You To Beautiful